Cainarachi poison frog is a member of a group of small New World frogs that are famous for their ability to secrete very powerful toxins from their skin. These remarkable frogs also have quirky warning colorations and unique pads on their thick fur on the upper side of the fingers. The amazing Cainarachi poison frog is dark red on top, turning to black and bright blue or green on the limbs, with noticeable yellow stripes running down the side of the body. In common with other frogs of the genus Ameerega, the skin on the upper side is slightly grainy and the first toe notably elongated. The limbs are short but strong. The Cainarachi poison frog is an agile climber and jumper. 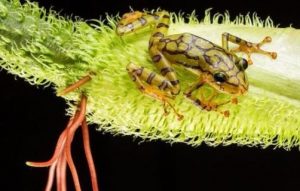 So, Ameerega cainarachi presents the back and surface of the hind limbs in a granular form; first finger of the hand larger than the second; premaxillary and maxillary teeth present; discs not very expanded. Red brick back; dorsolaterales fringes that originates in the groin extending up to the snout, of yellow color until the height of the arm, changing its color to copper-reddish in the region of the head; yellow labial line; flanks of black color; blue belly with thin black lines; surface of the bluish or reddish-brown hind limbs in other individuals.

Recognized for the toxic alkaloid secretions it has on its skin and uses to paralyze or kill potential predators, the Cainarachi poison frog’s outlandish coloration serves as a warning that it is poisonous. This toxicity is derived from their food, which consists mainly of insects. 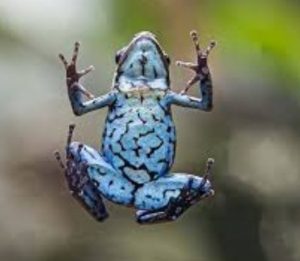 The reproductive behavior of the Cainarachi poison frog has so far not been described. Despite this, males tend to be fiercely territorial and engage in competitive vocal displays, calling loudly in a visible manner to attract female onlookers. Once mated, the male takes the female to a damp cave next to a water source where the small handful of eggs is subsequently placed. The male fertilizes the eggs and then protects them until the tadpoles develop. Once hatched, the tadpoles are transported on the back of the male to a stream where they are deposited, eventually the tadpoles will undergo metamorphosis to become adult frogs.

Ameerega cainarachi is distinguished from Ameerega parvula because it is larger in size and has yellow spots on the thigh (absent in A. parvula); of Ameerega macero for having full dorsolateral stripes (incomplete in A. macero); of Ameerega petersi for presenting the back of red brick (instead of brown in A. petersi); of Allobates zaparo for having the blue belly with few black lines (instead of a black belly with blue spots in A. zaparo).

Sexual dimorphism is exhibited only by males being slightly smaller than females.

The Cainarachi poison frog is known only from the Cainarachi Valley in the northern department of San Martín, Peru, where it is most abundant in Huallaga Canyon, at elevations between 250 and 750 meters.

The Cainarachi poison frog is typically found near small streams in the humid tropical forest of the hills.

It is classified as Vulnerable (VU) on the IUCN Red List and is listed on Appendix II of CITES.

Less than ten places are known where the Cainarachi poison frog lives. It is extremely vulnerable to destructive activities within its small range. Unfortunately, this species is little known and much of its habitat is very close to human settlements and the conversion of forests into coffee plantations, wood for firewood and livestock grazing, endangers its habitat. Fortunately, there does not appear to be a demand for this species in the international pet trade, which offers some relief as other rare amphibians have been affected by this cause.

With a small range, the survival of the Cainarachi poison frog is linked to the future management of its habitat. As this Vulnerable frog is not found in protected reserves, measures should be taken to safeguard the areas in which it is found.

Ameerega cainarachi is a diurnal species, it can be found in pre-montane forests near small streams or streams. This species can not survive in forests altered by anthropogenic activities (Schulte, 1989). At night you can see them on leaves, far from the ground. The males are in charge of taking care of the eggs and then transporting their tadpoles to small streams. It is believed that females arrive to deposit 6 to 12 eggs, which are presumed to be deposited on dry leaves as in the case of Ameerega petersi. The males can carry up to 10 tadpoles on the back.

Ameerega cainarachi is distributed in the Department of San Martin-Peru in the Huallaga Canyon at a height range of 350 to 800 meters above sea level.