Rare and elusive, the Table Mountain ghost frog of africa is found on the slopes of Cape Town’s Table Mountain. It is a small frog with a thick and compact body that allows it to hide in small crevices. Adults have a mottled pigmentation consisting of a green background, dotted with purple to reddish-brown spots. The hind limbs are fully webbed, making this species a great swimmer, while the spatulate fingers allow it to grip firmly on rocky substrates. During the breeding season, males develop loose skin folds that increase their oxygen consumption in the water, and both sexes develop spiny structures on their bodies that allow them to have a better grip during the amplexus (the mating hug).

Biology . Due to its rarity relatively little is known about the natural history of the Table Mountain ghost frog. Reproduction takes place in spring-summer, when current flow is at its lowest, presumably to ensure that the eggs are not laid in a stream that will eventually dry out. Tadpoles take around 12 months to complete metamorphosis, making year-round water supply essential. The behavior of the adults is not well documented, but they are known to leave streams and travel through land during the non-breeding season.

Range . The Table Mountain ghost frog is confined to an area of ​​no more than eight square kilometers on the southern and eastern slopes of Table Mountain in the Western Cape Town Province, South Africa.

Habitat . This species inhabits forested valleys and moorland fynbos, where there are usually clear, fast-flowing perennial streams. Non-breeding adults have been seen out of streams traveling over open land and in caves.

State . It is classified as Critically Endangered (CR) on the IUCN Red List.

Threats . Despite being in sheltered locations, the Table Mountain ghost frog is still subject to a number of threats, each of which can have a devastating impact on the small range of this species. The spread of exotic vegetation and in particular the planting of exotic pines, latex and poplars, has resulted in the clogging of streams, creating areas of stagnant water unsuitable for the species. Consequently, even within its restricted range, it has become locally extinct along certain stretches. Other potential threats include the construction of dams that reduce water flow, frequent fires, global climate changeand intense eco-tourism, while in recent years the deadly fungal disease chytridiomycosis has affected some populations of this critically endangered species . 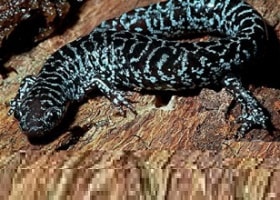 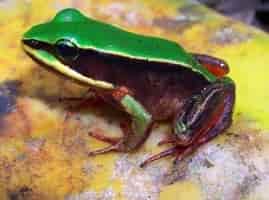 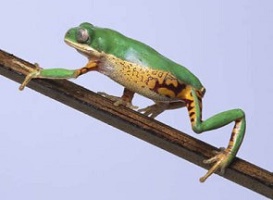 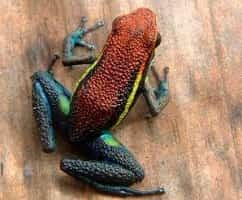